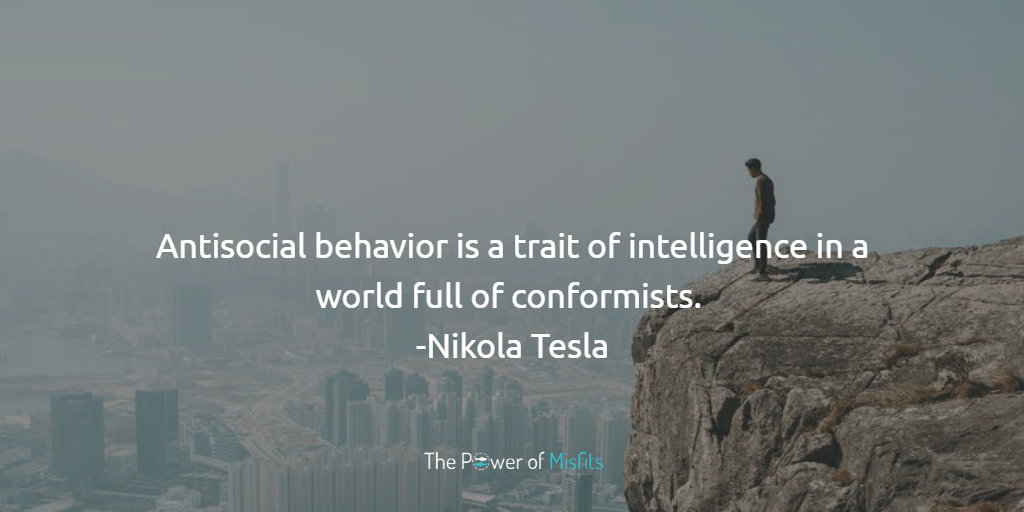 Our compilation of antisocial quotes will ring true for all those loners, misfits, outsiders, and rebels who feel alienated from modern society and everything it represents.

The word ‘antisocial’ has negative connotations. It makes sense if we use it to describe people who commit crimes and hurt others.

But there is also a second meaning to being antisocial. It involves being opposed to society and its values; refusing to be an object to social conditioning and not wanting to blindly conform to the norms of polite behavior.

An antisocial attitude can sometimes turn a person into a loner and a recluse. They choose to isolate themselves than be a part of a society that feels so sick and alien.

The below quotes talk both about being antisocial and asocial – i.e. being opposed to society and withdrawn from it. Whichever it is that characterizes you better, I’m sure that you will find a lot of truth in these sayings.

36 Antisocial Quotes Every Misfit Will Relate to!

1. Antisocial behavior is a trait of intelligence in a world full of conformists.

If you like this quote, check out this compilation of conformity quotes.

3. A high degree of intellect tends to make a man unsocial.

4. Sometimes those who don’t socialize much aren’t actually antisocial. They just have no tolerance for drama and fake people. 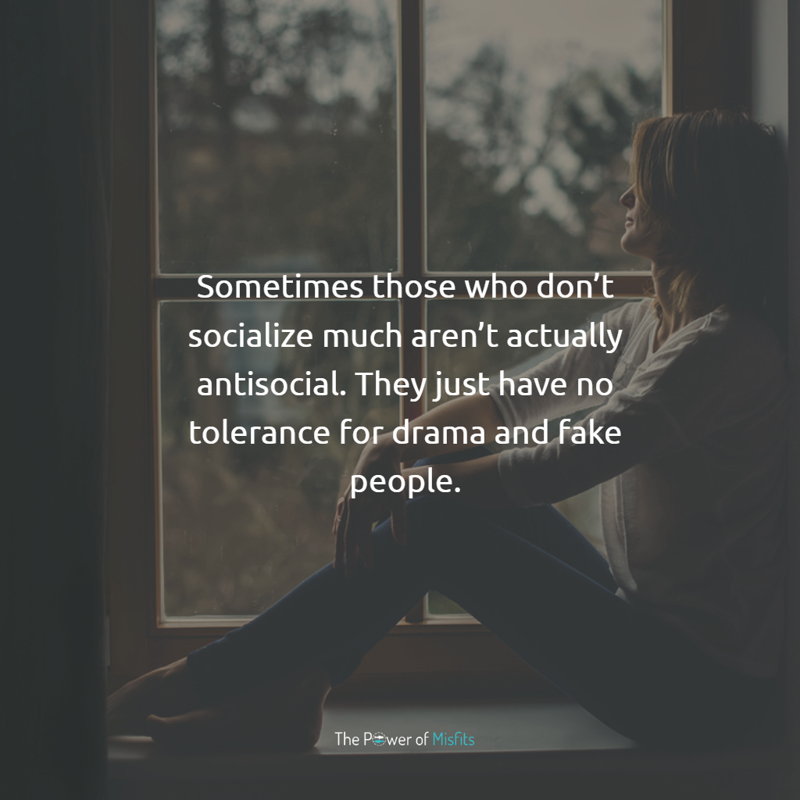 5. The poet, the artist, the sleuth – whoever sharpens our perception tends to be antisocial; rarely “well-adjusted”, he cannot go along with currents and trends.

7. I don’t hate people. I just feel better when they are not around.

8. When the whole world is running towards a cliff, he who is running in the opposite direction appears to have lost his mind.

9. Opt for privacy and solitude. That doesn’t make you antisocial or cause you to reject the rest of the world.

If you find this quote relatable, read this article about being a selectively social person.

11. I’m antisocial, they say. I don’t mix. It’s so strange. I’m very social indeed. It all depends on what you mean by social, doesn’t it?

12. I’m on the benevolent side of antisocial. I don’t mind people, but I’d prefer not to have a lot of them around.

13. I’m not antisocial or anything, but I sometimes don’t see the point of hanging out with a whole bunch of people at a party if all you really want to do is hang out with just one person.

Do you relate to this? You could be an introvert. Take a look at this guide to introversion and its traits.

14. I’m now quite cured of seeking pleasure in society, be it country or town. A sensible man ought to find sufficient company in himself. 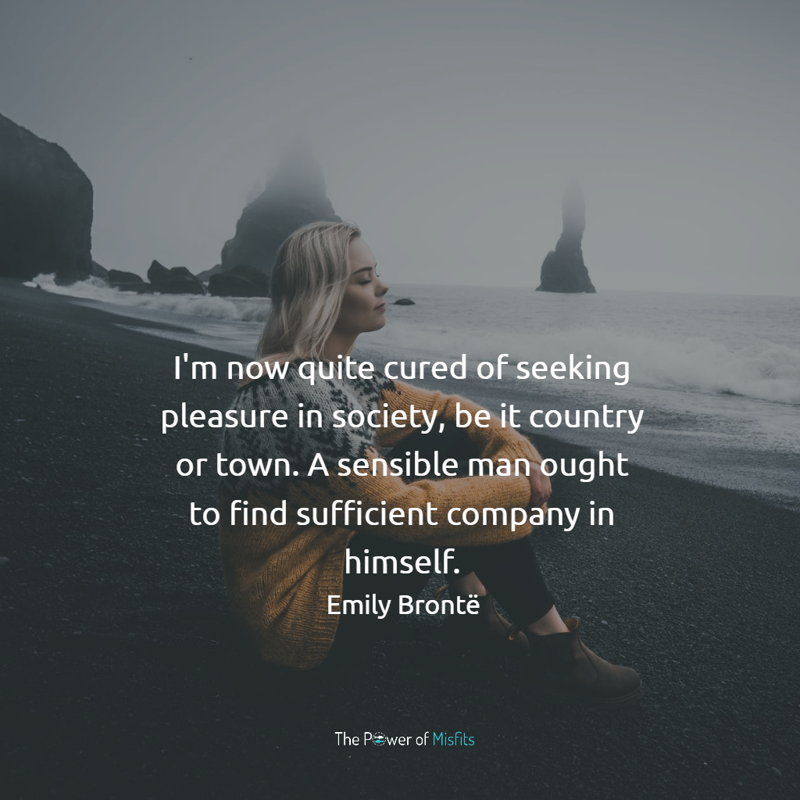 15. But I guess that was the whole problem, at that point, my inability to deal with normal human interaction.

16. I don’t know, maybe I just wanted to be alone. Maybe I just didn’t want to be social because antisocial people have a whole lot less to lose.

17. I’m not a social animal. That is, I’m not anti-social, I don’t actively repel people – not intentionally anyway – I’m just not good in rooms full of people I don’t know and/or like.

18. We should be aware that in a sick or even mildly mediocre society such as exists today, it is a badge of honor to be possessed of an anti-social streak.

19. I’m only antisocial when I’m around people. 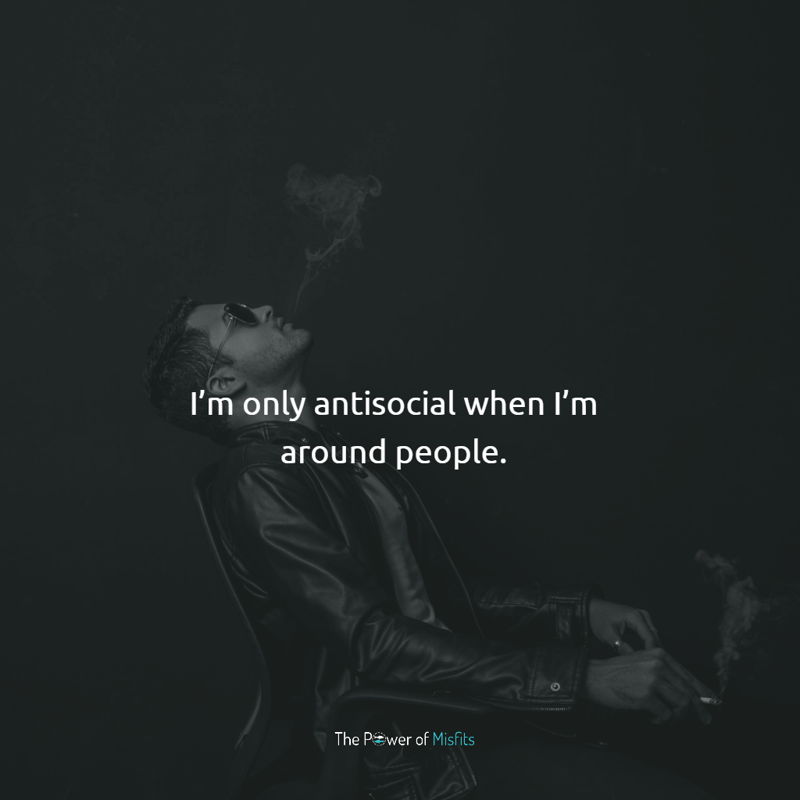 Does this quote ring a bell? You could be a loner. You might also appreciate this list of lone wolf quotes.

21. In this world where value is unknown, but the price of anything is marked, where the creation of self has been abandoned for the search for self, the behavior diagnosed as antisocial is often too quickly ascribed to intelligence when thrust into contact with widespread conformity, and refuses.

22. Friends who understand your antisocial phases and don’t take them personally are important.

23. Being considered crazy by those who are still victims of cultural conditioning is a compliment.

24. It is no measure of health to be well adjusted to a profoundly sick society. 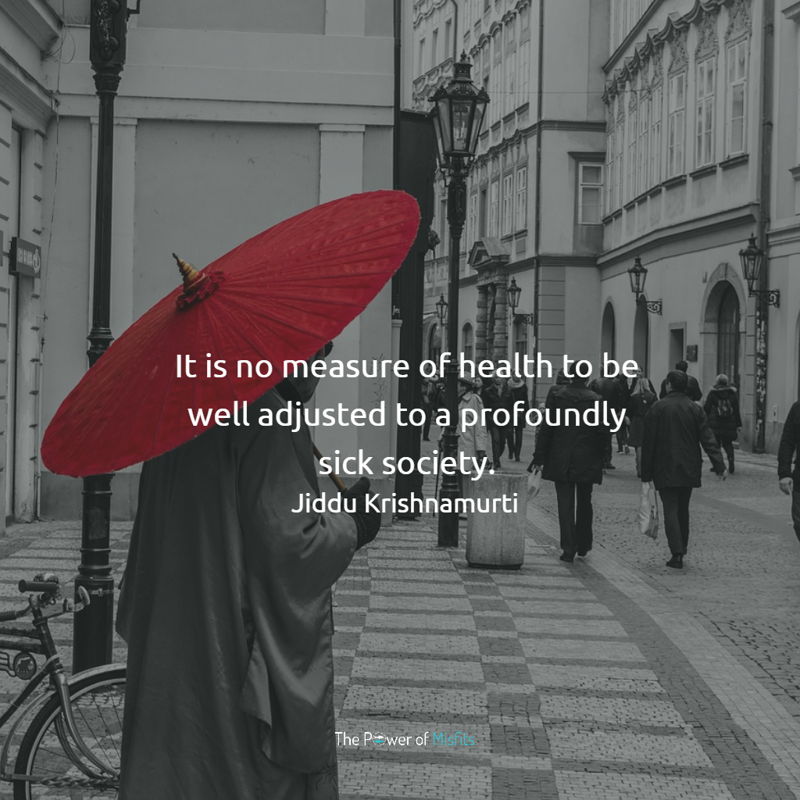 26. Humans are naturally social; civilization causes us to be antisocial.

27. Imagine you are born inside an asylum, and everyone around you is insane. Then imagine this asylum of souls is the size of a whole planet, and you have a clearer understanding of the meaning of life. I’ve often been perceived as either mad, courageous, crazy, or antisocial for speaking what nobody else can see or understand. But it has nothing to do with those conclusions, based on the same ignorance of the observers. I was simply being sane. Being sane is not a normal thing on a planet full of the insane.

28. In a society as broken as ours, “antisocial” behavior is the only behavior worth defending.

29. It was remarkable that Raskolnikov had almost no friends while he was at the university, kept aloof from everyone, visited no one, and had difficulty receiving visitors. General gatherings, conversations, merrymaking – he somehow did not participate in any of it. He was a zealous student and was respected for it, but no one loved him. He was very poor and somehow haughtily proud and unsociable, as though he were keeping something to himself.

Do you have few or no friends, just like Raskolnikov? You may want to read this guide to understand why. 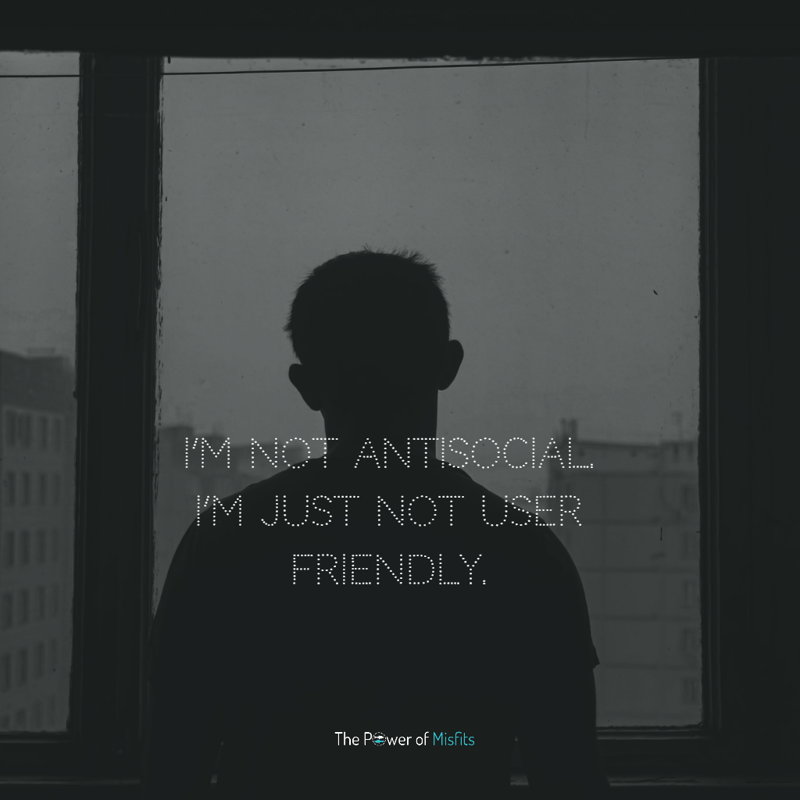 32. This is why we must learn from madmen: because they do not stop, even when others shout at them to be silent. Someone who protests a little, who writes one letter—it’s fine, it doesn’t make any problems. But someone who never stops is soon seen as an outsider, antisocial, a madman. These are the ones who show us how to effectively resist evil.

33. The final fact being that at the very bottom of his soul he was an outsider, and anti-social, and he accepted the fact inwardly, no matter how Bond-Streety he was on the outside. His isolation was a necessity to him; just as the appearance of conformity and mixing-in with the smart people was also a necessity.

If you often feel like an outsider in the company of other people, I recommend reading this article.

34. I was really bored, pretty antisocial, and not much of a joiner, and people thought that was a problem. I hated high school. In a way, it was good… I think, for a writer, it’s good to be comfortable with being on the outside.

35. I was definitely always the bigger girl and kind of weird. I didn’t make friends very easily and I was a big reader, so I was very antisocial, and I knew that people were judging me.

36. I was a nerd growing up, and I’m a little antisocial and awkward.

Are you awkward too? This guide to social ineptness may help you make better sense of your personality.

An Important Truth Learned from the Above Quotes on Being Antisocial

As you can see from the quotes above, being antisocial is not always a bad thing.

Sometimes those who are opposed to society are closer to the truth than the majority. They have a more critical thinking mindset, a more independent attitude, and ultimately, a clearer vision.

After all, it’s so easy to lose yourself to herd mentality and conformity for the sake of being liked and accepted. That’s why some people who are perceived as antisocial just seek to stay true to themselves.

So, if you are one of those rebels, outsiders, and misfits feeling alien to today’s society, keep in mind this list of antisocial quotes. It will remind you that you might very well be saner than the ‘perfectly normal’ majority.