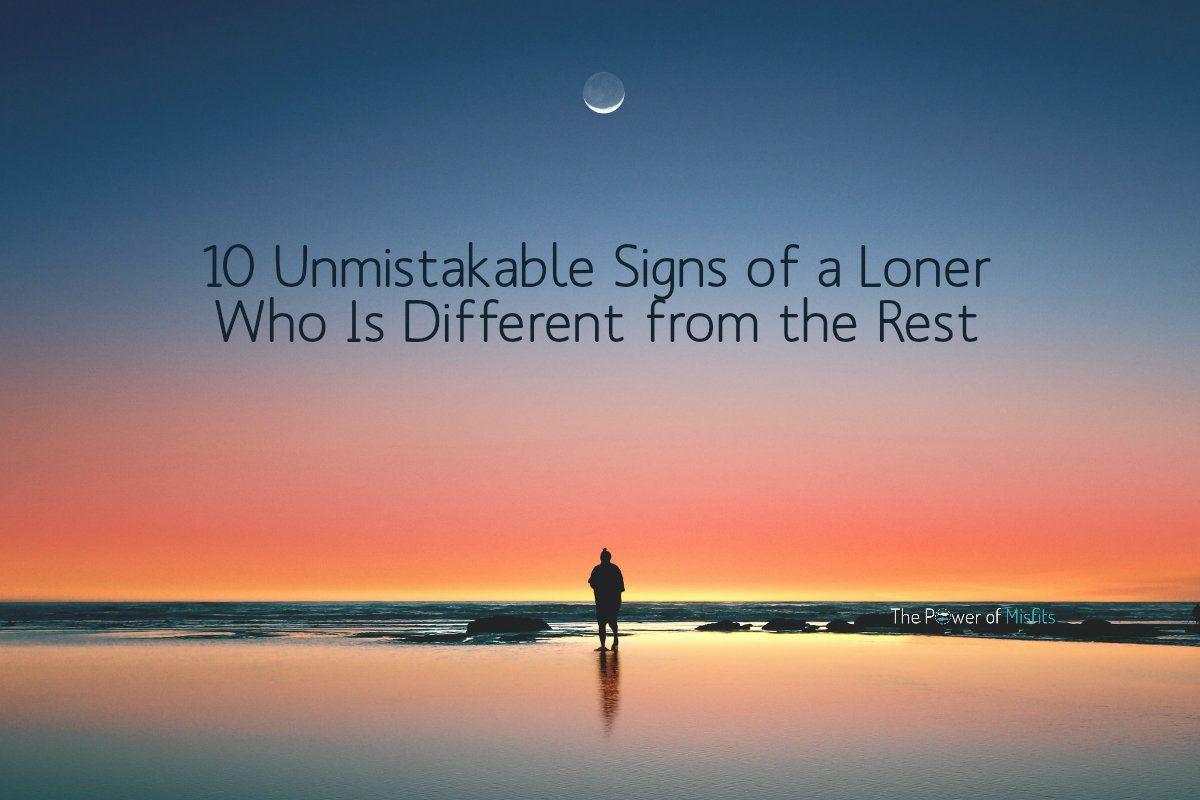 A loner is not the type of person you come across often. It’s a rare personality, an independent thinker, a deep soul. Below are a few signs of a loner to help you identify one in your life or find out whether this is you. But first, let’s clarify what it means to be one.

A loner is someone who has a strong preference for solitary pastimes and enjoys being on their own. It is a person who is happy with living a quiet, peaceful life with minimum social interaction. Thus, loners tend to avoid too many contacts with other people.

A lone wolf is also an independent personality who doesn’t give much importance to social approval and shows little interest in being a part of a group.

Introverts and loners are not among the personality types that are favored by today’s society. In a world that puts great emphasis on assertiveness, leadership, and dynamism, the quiet ones often end up underestimated and misunderstood.

But despite this, they remain among the most honest and authentic people out there.

Let’s explore a few traits of loners that make them so different from the rest.

Signs of a loner

1. Values peace and freedom more than anything

If you ask a loner what the most important thing in life is, be sure that they will say something like ‘the freedom to be yourself’ or ‘a peace of mind’.

These two things are among the basic values and emotional needs of a lone wolf. For this reason, they will never tolerate things or people that take away their freedom and peace.

A loner is not going to stay in an abusive relationship or allow someone to violate their personal boundaries. They will certainly stay away from confrontational and intrusive people who thrive on drama, negativity, and gossip.

Being a loner means enjoying your own company. It’s one of the most basic traits of a lone wolf. Solitary people are psychologically self-sufficient and never get bored alone.

If you are a loner, you would prefer to spend a weekend at home all by yourself than waste it on shallow talk and meaningless pastimes in the company of other people.

You aren’t afraid to be alone – you choose peaceful solitude over being in the wrong relationships or hanging out with random people.

One of the most telling signs of a loner is that he or she is a private person. You won’t see them poking their nose in other people’s business, breaking into someone’s personal space, or asking indiscreet questions.

Loners appreciate when others do the same too. For this reason, they won’t tolerate nosy people in their life. When they face intrusive behavior, they set strong personal boundaries once and for all and distance themselves from the person who is snooping in their business.

4. Cares about the quality, not the number of social connections

Typically, a loner has very low needs for social interaction. They are more likely to get bored when surrounded by other people than while being on their own. So they see no sense in living an active social life and maintaining a big circle.

People usually have many different acquaintances and friends, which inevitably leads to the fact that some of them will be just random and superficial connections.

In comparison, a loner tends to have very few friends – most likely, just one or two. But these will be honest and loyal people bonded to them by a deep emotional connection and meaningful communication.

5. May look aloof but is deeply sensitive and loyal

Being a loner is not a synonym of being cold-hearted, even though solitary folks may sometimes appear too standoffish. But the truth is that they have a deeply sensitive side they are hiding from everyone.

Loners are profoundly loyal to those few close people they have in their lives. Their loved ones mean the world to them, even though the solitary person doesn’t always know how to express their affection.

The irony is that despite loners may sometimes seem antisocial and aloof, they often enjoy the most long-lasting relationships and friendships. It has to do with the fact that they choose to be with someone because they have a deep connection with that person, not out of the fear of being alone.

6. Stays away from conflict and drama

If you are a loner, you have no interest in talking about other people behind their backs or participating in office cliques. You understand that some personalities just create drama out of nothing to get everyone’s attention. Then there are others who seek to spice up their boring lives with gossip and futile fights.

You try to stay away from such people because they create unnecessary tension and destroy your sense of inner harmony. As a loner, you also tend to avoid conflict. Since you appreciate peace most of all, you distance yourself from intense situations and needless arguments that ruin it.

Another one of the most important signs of a loner is independent thinking. It’s not a person who is easily affected by public opinion or other people’s points of view. They won’t do things out of peer pressure or herd mentality.

Loners tend to rely on their own judgment rather than seek validation from other people. After all, their needs for social affiliation and acceptance are lower, which affects their way of thinking too.

Also, since a loner spends a good deal of their time on their own, they have the privilege to think about everything in depth. This gives them the clarity of judgment, allowing them to think critically and avoid blind belief.

Another sign of a loner is emotional guardedness. While being a loner is not equal to being emotionally unavailable or cold, it is definitely a synonym for keeping things to yourself.

If you are a solitary person, you won’t open up easily and will need time to get used to new people and environments. You may also experience difficulties with talking about your feelings.

Since loners tend to rely on themselves, they may find it hard to speak their mind when it comes to emotional issues and asking for help. Lone wolves hate to expose their vulnerable side to other people.

9. Stays loyal to themselves no matter what

If you are a loner, staying loyal to yourself is among the most basic priorities in your life. It is a synonym of freedom, which means much more to you than getting other people’s approval and validation.

A loner will never pretend, fake their feelings, or try to impress other people. They won’t try to be nice to someone just because it is considered a socially accepted behavior.

Loners are genuine folks. They care more about being honest and decent than being nice and likable. While they may not be the friendliest people you will meet, be sure that they will be among the most authentic ones.

Finally, one more key sign of being a loner is having a rich inner world and vivid imagination. If you are a lone wolf, you most likely live more in your head than in the real world. Your inner monologue never stops and you always find something to ponder about.

Having a rich inner life is another reason why a loner pursues solitary activities and doesn’t seek to spend time with other people.

What’s the difference between a loner and an introvert?

It may look like the above signs of a loner are very much alike to those of an introvert. But even though the two share many common traits, they are not the same. Most loners are introverts, but not every introvert is a loner.

An introvert needs to withdraw from people and stay on their own after socializing. It helps them replenish their mental and emotional energy, which is given away during social interaction.

But introverts still have communication needs, want to make friends, and socialize with other people.

On the contrary, loners are less interested in all this. They have extremely low needs for social affiliation and are happier with living a quiet, isolated life. They find meaning in solitary pastimes and enjoying the company of their few loved ones.