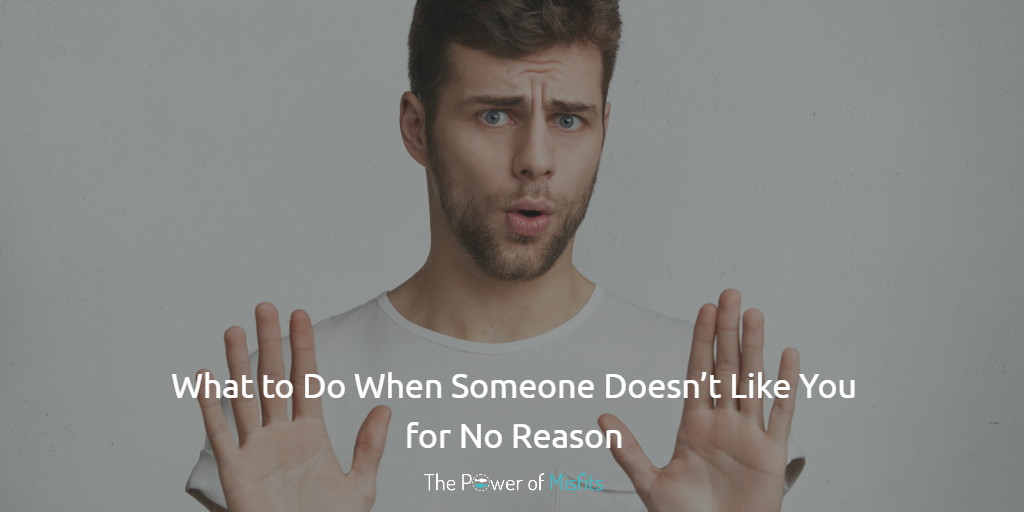 It’s easy to get bitter and annoyed when someone doesn’t like you for no reason. It could be anyone–a co-worker, your spouse’s friend, or someone from your best friend’s circle.

Usually, a person who dislikes you for no obvious reason is not a close friend. It’s an acquaintance who happens to share the same social circle with you.

Sometimes you can’t even put your finger on what made you think that this person doesn’t like you. But you can see the subtle hints in their body language, the way they look at you, and the things they say. So, you just know it. They don’t like you and you don’t understand the reason.

It’s not a nice experience, and you may even start wondering what made them feel this way about you. Or you may get irritated and decide to dislike them back.

But the most difficult part is to know how to act around someone who doesn’t like you. Read on to learn how to handle this situation.

What to Do When Someone Doesn’t Like You for No Reason?

1. Realize that some personalities clash, and this is normal

We all have our own private list of behaviors and personality traits that we despise. Certain things about other people trigger us to feel annoyed and not want to socialize with them.

Whenever we meet a person who has one of those traits, we immediately form a negative impression of them. It happens on the subconscious level–they may be the best person ever, but we are still cautious about them just because they make lowbrow jokes or talk too much about themselves.

This is what could explain the situation when someone doesn’t like you for no reason. You may have one of those behaviors and traits that this person can’t stand in others.

But the most important question is, should you care? Think about it from the opposite perspective. I’m sure that you too can name a few people you don’t like for no reason. Maybe they make you uncomfortable or you just find them boring because you have nothing in common.

It’s pretty normal–you can’t like everyone, and, similarly, not everyone is going to like you. So, you’d better make peace with this fact and stop worrying.

2. Keep in mind that this person may have issues of their own

Some people project their psychological problems onto others. They may have a tough time in life or suffer from mental health issues, so you may mistake their behavior for an indication of dislike, while it has nothing to do with you.

A girl from your friend’s circle may suffer from pathological jealousy, so she gets mad at you because she saw you talking to her boyfriend. A co-worker may have mixed feelings about you because you remind her of her ex.

There can be so many instances when people have personal issues that affect those around them. That’s why the best strategy is to not take it personally.

Once again, when someone doesn’t like you for no reason, it’s more about them than it is about you. This automatically means that worrying about it is pointless.

Now, the question is, how do you handle a person who doesn’t like you? Should you try to approach them and make them change their mind about you?

I don’t think it’s a good idea. If someone dislikes you, they have already formed an opinion for some reason. So, trying to make them like you is pretty much a waste of time.

In general, it’s better to not give much importance to other people’s opinions about you. It’s going to save you from unnecessary tension and disappointment.

Therefore, ignoring such people is a much wiser decision.

For example, if you are at a get-together, you may choose to not talk to this person at all. You may both participate in group discussions, but no one forces you to address your words to them or have one-to-one conversations.

Similarly, you can ignore their questions and remarks if they make you uncomfortable. Remember that you are not obliged to answer if someone is being nosy or rude.

4. Don’t escalate the situation or hash things out

It can be tempting to make a mean remark or ask a provocative question when talking to someone who doesn’t like you. You are irritated with their attitude, so you want to pay them back for their unfriendly behavior.

But it’s better to resist this temptation. Why would you make a fuss out of nothing just to bring more confrontation to your life? Isn’t life complicated enough without pointless arguments with random people?

Okay, you can reply with a sarcastic remark when someone asks you an inappropriate question. But make sure to not come down to insults, because this will only escalate the situation into conflict. Don’t let someone you don’t care about make you lose your cool. They aren’t worth it.

Similarly, it doesn’t make sense to call out a person who doesn’t like you for no reason. They are just a passer-by in your life, so why would you hash things out? Do you really care to know why they dislike you? Do you really need to show them they are wrong about you?

It makes sense to have such conversations only with people whose feelings mean something to you. Otherwise, it’s better to just forget about it and distance yourself from that person. The fact that they dislike you for some reason is their problem, not yours.

5. Don’t feel bad about yourself

When people don’t like you for no reason, it’s easy to start doubting yourself. What are you doing wrong? Is it some behavior of yours that is to blame? Do you annoy those around you?

You may even start to wonder why people don’t like you in general. Maybe it’s not the first time someone treats you this way, so you feel like you are not a likable person and no one wants to be your friend.

Feeling not good enough is the worst thing you could do in this situation. It means that someone’s idea of you has affected your self-perception. If you have self-esteem issues, it’s really easy to fall into this trap.

Even if your communication skills need work, one person’s attitude is not the reason to feel bad about yourself. Yes, it’s an unpleasant situation, but think about all those people who love you. These are the only people whose opinions about you should matter.

Some people vibe, others don’t. Some personalities clash, as we said above. If someone doesn’t like you for no reason, it just means that they are not the right person for you to hang out with. It doesn’t mean something is wrong with you.

If you struggle with self-esteem issues in social situations, check out these articles for further guidance:

The good thing about people who don’t like you is that more often than not, they don’t belong to a circle of your close friends and relatives. This means that it’s easier to avoid one-to-one interaction and get rid of their company altogether.

Of course, this may be a co-worker you see daily in the office or your spouse’s relative you regularly meet at family gatherings. But you can still distance yourself from this person.

When someone at work or in your family circle doesn’t like you for no reason, you can cut your interaction to the very minimum. Just talk to them about work matters when it’s necessary or maintain a short polite conversation at family gatherings.

With other people being present, it’s easier to avoid exposing yourself to uncomfortable communication. If you ignore their questions and show them you have zero desire to talk, then, most probably, they will leave you alone.

After all, we are talking about people who don’t like you for no reason, not those who hate you. Though feeling unwanted can easily make you believe like the other person is totally against you, most likely, they are not.

Maybe you are exaggerating their negative feelings about you. Think about it. All this could be just a made-up situation, and, in reality, the other person doesn’t dislike you, as you believe. Maybe they are simply not interested enough. There is a difference.

To sum up, there is one important truth to remember when someone doesn’t like you for no reason (or you just believe that they don’t). It’s not something you should worry about. And it absolutely shouldn’t affect the way you feel about yourself.

Image by wayhomestudio on Freepik