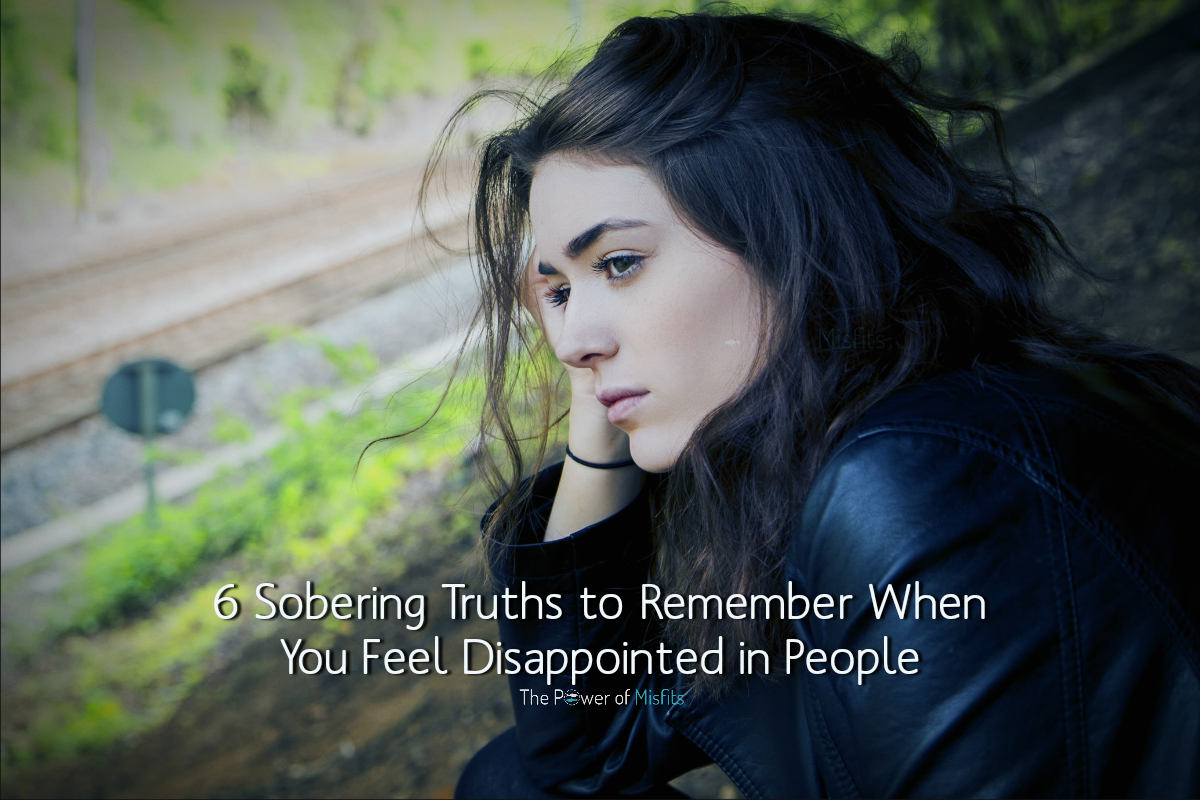 Everyone faces disappointment at some point in their life. People let us down, betray our trust, and break our hearts. It’s an inevitable part of life, and we can learn a lot from this frustrating occurrence.

But what if these negative experiences have left you feeling disappointed in people in general? What if you no longer trust anyone and only expect the worst from those around you?

6 Sobering Truths to Remember When You Feel Disappointed in People

1. When someone mistreats you, it’s the reflection of their worth, not yours

So many victims of abuse and bullying tend to neglect this simple truth.

When something bad happens to you and you face mistreatment, it inevitably takes a toll on your self-esteem. Your faults suddenly seem so huge and unforgivable. You start to feel like a small, inferior, and totally worthless human being.

Otherwise, they would have never treated you this way, right?

Some people are wired for taking advantage of others. Some other individuals are trying to run away from their own demons by bullying and abusing those around them.

Then there are also those who have no moral code and see nothing wrong in using and betraying their friends.

There can be many more scenarios, but they all boil down to one sobering truth – people who mistreat others are fully responsible for their actions. Their behavior is their fault, not their victims’.

2. It’s your expectations that leave you disappointed

When you feel like your sibling or friend doesn’t care about you, it’s easy to end up disappointed in people as a whole. After all, it’s painful to see a lack of interest from someone you used to have a close relationship with.

But if you delve into the essence of your feelings, you will see that it’s your own expectations towards this person that have left you disappointed. You expected that your friend would always be by your side and your relationship would never change.

But life doesn’t always work this way. People change – along with their circumstances and interests. Someone who used to be your best friend in college may no longer be the right company for you. Your sister may be focused on her own family now, and that’s the reason she can’t devote much time to you.

Therefore, the best you can do is to keep your expectations toward other people low – or, at least, realistic. It’s the surest way to avoid disappointment.

3. People are neither bad nor good

When we think about people as a whole, we often make assumptions that are intrinsically wrong. We tend to generalize and put people into categories. Through these cognitive distortions, we find it easier to make sense of the world around us.

But the truth is that people as a whole are neither good nor evil. Moreover, every given person has both negative and positive sides.

Perceiving the world in extremes is a sure way to disappointment. You may expect others to be fairytale-like characters and get let down when they turn out to be ordinary people with flaws and weaknesses.

Alternatively, you may be convinced that everyone around you seeks to hurt and take advantage of you. In this case, you suffer from chronic disappointment in people.

Once again, it’s your expectations that let you down, so it’s better to keep them realistic to make sure you don’t fall victim to unhelpful generalizations.

4. We all have flaws and struggles

Not taking toxic personalities and devious manipulators into account, most people don’t mean to let others down. It happens because they have flaws and issues of their own.

You may be disappointed in your friend who forgot about your birthday. But what if she had a really difficult day at work and literally had no time to call you? What if she had a terrible argument with her husband and couldn’t think about anything else all day long?

Sometimes other people’s behavior lets us down, but they may be dealing with their own problems. Most of the time, they don’t mean to hurt us.

Misunderstandings often happen when we don’t know the whole story. We just assume that the other person doesn’t care. Or that they are using us. But things are not always what they seem.

So when you feel disappointed in people, remember that they have their own struggles and flaws and don’t always behave the way you want them to.

5. You are responsible for setting your boundaries

For example, you suspect that someone sees you as a friend of convenience. They always ask you for favors and pop up in your life when they need something.

It’s quite a disappointing situation, especially if you thought this person was your friend. You are genuinely interested in this friendship and have a great time with them, but their behavior tells a different story.

Once again, you are disappointed because your expectations toward this person failed, but there is more to it. You may have no power over their behavior, but you are in charge of your own boundaries.

You choose whether you will let them take advantage of you or not. It’s always better to say no to such people than hold onto the illusion that they would be there for you if you needed their help.

When we help people who don’t deserve it, it inevitably leads us to disappointment because we feel that our efforts were taken for granted.

6. You are responsible for communicating your needs

Sometimes people let us down… without even realizing it. So we are responsible for letting them know about it.

Poor communication is probably the most basic root of all friendship and relationship problems. We all have needs and expectations, but we don’t always communicate them effectively.

Unfortunately, humans still haven’t mastered the art of telepathy, which means that the only way to let someone know about your feelings is to talk to them. They may not even be aware that their behavior lets you down!

Communicating your needs and expectations clearly is particularly important in close relationships. Your friends, family, and partner deserve to know why you are pulling away.

They may have no idea that their behavior or decision bothered you so much. It may not seem a big deal to them.

So instead of feeling disappointed in people and angry at the whole world, find the courage to talk to the person who let you down. The whole situation may just be a misunderstanding.

To sum up, failed expectations are the main cause of disappointment. So the best thing you can do to avoid it is to view other people and your relationships with them realistically. Also, remember to set strong boundaries and communicate your needs as clearly as you can.