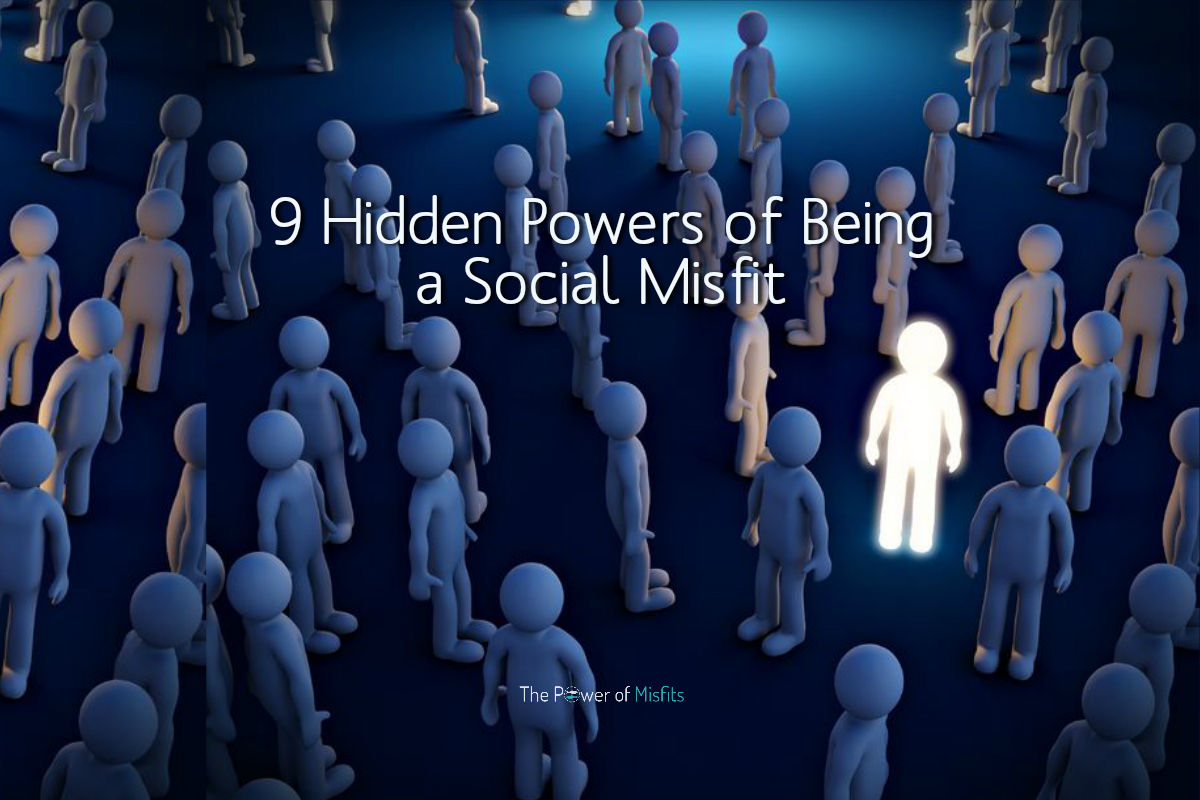 I know I’ve always been a social misfit. I could never really blend in with those around me and feel a part of a group.

Do you feel like a misfit too? Like you don’t belong to society and don’t identify with any particular group of people?

Let’s talk about what it means to be a social misfit and why it’s not a bad thing. In fact, it could hide a few unexpected powers you had no idea about.

It is someone who feels that he or she doesn’t fit into society because of their views, values, or personality traits. It is a person who doesn’t belong to any particular social group. This is a non-conformist who stands out from the crowd.

Even though this experience can sometimes cause negative feelings of alienation and loneliness, being a misfit in today’s society is not a bad thing at all.

9 hidden powers of being a social misfit

Herd mentality has always been an unfortunate consequence of being a part of society. It’s so easy to fall victim to herd behavior and do something just because everyone else does.

This is where social misfits differ from the rest. They don’t accept things at face value and don’t rush to act based on public opinion or someone else’s words. They prefer to rely on their own judgment.

A misfit will filter all the information they learn through the prism of critical thinking.

2. Staying loyal to yourself

An independent thinker who doesn’t fit into society will choose to stay loyal to themselves no matter what. They won’t easily do things out of peer pressure. They won’t pursue futile trends just because everyone else does.

For this reason, a misfit is less likely to waste their time on the wrong things. Be it a job, a relationship, or an overall attitude to life, they will make choices that truly resonate with their inner being.

Being a misfit means staying true to yourself instead of conforming to social conditioning or someone else’s expectations.

If you are a social misfit, you are not a person who would lie or fake their feelings in order to make a good impression on someone. You care less about what other people think and more about being loyal to yourself.

You will be honest with those around you, even if they don’t always like it. Someone who doesn’t fit into society won’t say things they don’t mean just because it’s considered nice or polite. They prefer to look eccentric to others than be fake.

One of the basic reasons someone feels like a misfit in today’s society is that they are capable of deep thought.

It’s a person who analyzes everything in-depth and doesn’t shy away from big questions. They often ask themselves why and seek to understand the meaning of everything.

Still, modern society seems to promote shallow values and primitive instincts. Just look at the role models of today. Narcissistic celebrities, cold-hearted CEOs, and dumb influencers who make a fool of themselves in order to get attention on social media.

So it’s not a coincidence that deep thinkers feel like they are not (and don’t want to be) a part of this society.

Even though a social misfit often feels alienated from those around them, they know how to read people.

If you are one, then you are used to playing the role of an outsider in social settings. It gives you the opportunity to observe people and notice the nuances of their behavior. Over years, you develop a certain degree of perceptiveness when it comes to people reading.

There is a study to demonstrate the validity of this claim. Researchers at Yale University found that lonely introverts were able to predict typical social behaviors more accurately than other participants.

A misfit is not a person who seeks to have a big social circle and be liked by everyone.

For this reason, they are extremely picky when it comes to social connections. It means that a social misfit is highly unlikely to surround themselves with the wrong people.

They are not afraid of being alone – solitude is their friend, not an enemy. So they prefer to be on their own than in the wrong company.

Therefore, social misfits see sense in maintaining relationships or friendships only when they are based on a genuine connection, trust, and reciprocated interest. They won’t keep people in their lives out of convenience or fear of loneliness.

The very term social misfit implies that it’s a person who is different from the rest. And so is their way of thinking.

Not conforming to society automatically means that you don’t agree with some values it promotes or certain rules and behavioral models it imposes. It is a sign that you perceive the world in a different way than you were conditioned to.

You are not afraid to stand out from the crowd and do your thing while everyone else is conforming to society-imposed ideals. It means that you are able to think more clearly and out of the box, finding unusual solutions to ordinary problems.

It’s not a person who suffers greatly because of being rejected by society but someone who makes a conscious choice to partly or fully isolate themselves from it.

It is someone who has the power to use social rejection as a creative inspiration. History shows us many examples of great thinkers who were rejected by the society they lived in.

9. Not caring about what other people think

Not relying on other people’s opinions is great power in our society of attention-seekers.

Wherever you go today, you see people begging for attention and acceptance. It is especially evident on social media since sharing your private life online has become the norm.

Misfits don’t do that because they don’t seek social acceptance. They already feel that they are too different to fit in with others, so it makes no sense to pursue their approval. Not caring about what other people think is a sign of an independent and self-sufficient person.

Do you recognize yourself in the description above? Consider getting yourself a copy of my book where I analyze the causes of being a misfit and offer ways to thrive in today’s society.