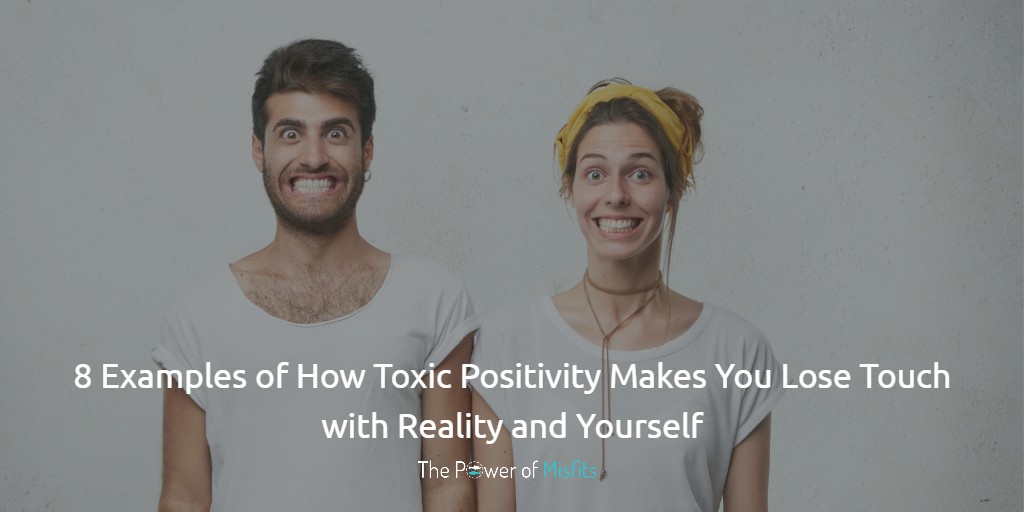 Be positive. We hear this piece of advice all the time. While realistic optimism is great, it’s important to not fall victim to blind positivity, which can prove more harmful than it may seem. First of all, you need to be aware of how it shows up in daily life, and that’s why we list a few toxic positivity examples below.

What Is Toxic Positivity? The Definition

It means practicing unrealistic and blind positive thinking, which makes you overlook potential risks in any given situation and avoid every bit of negativity, including your own feelings.

This approach may leave you suppressing your negative emotions because you seek to stay positive all the time. This can have lasting effects on your mental and physical health, so toxic positivity can do more harm than you think. In essence, this mindset makes you lose touch both with reality and yourself.

The point is to be able to tell the difference between healthy positivity and toxic one. If you suspect that you might suffer from this way of thinking, read through the toxic positivity examples below.

8 Toxic Positivity Examples You Should Be Aware of

1. Running away from negative experiences

Life is complex and consists of both negative and positive experiences. You can’t just push a button and switch off every bit of negativity in your life.

A telling example of toxic positivity is when you try to avoid problems and challenges out of fear that facing them will make you feel bad. You need to stay positive 24/7, right?

In reality, you can’t. Healthy positive thinking is not about forcing yourself to feel happy all the time. It’s about reminding yourself of the bright side of life when everything goes wrong.

Example: Your special someone’s behavior has been annoying you for a while now, but you don’t call him/her out. Instead, you put up with the situation and try to pretend like the problem is not there. 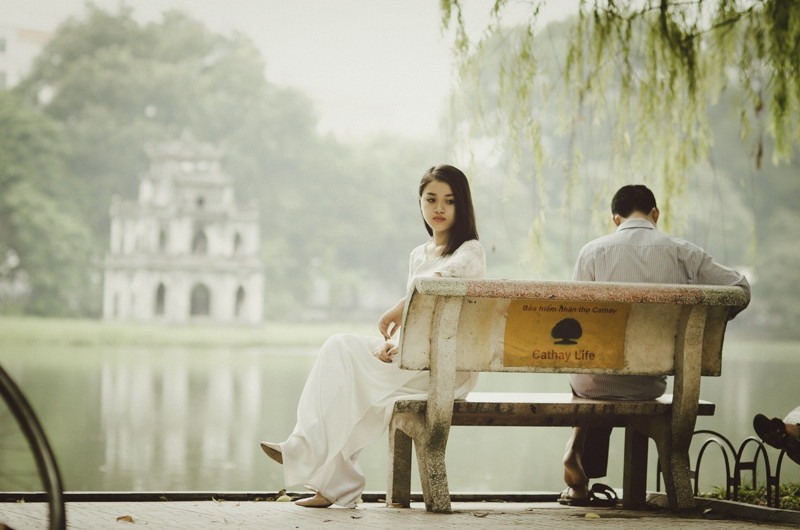 In a similar way, you can’t talk only about positive things all the time. It’s also not possible to entirely avoid misunderstandings and arguments. You will inevitably need to have conversations on difficult, depressing, and boring topics.

The truth is that negative experiences and phenomena are the ones that prompt us to think and grow. So, when you refuse to ponder and talk about frustrating things, it can be a sign that your positive thinking is unrealistic and unproductive.

This behavior is among the examples of toxic positivity because you seek to avoid anything that could make you feel low.

Example: Your friend is telling you about a negative scenario for the world economy, and you begin to feel worried. Instead of listening to him and thinking it over, you are trying to end the conversation as soon as possible and shift it to a more pleasant topic.

3. Bottling up your negative emotions

When you feel angry at someone or disappointed with your life, you run away from what you feel and try to convince yourself that everything is fine and you are calm and happy. You basically don’t allow yourself to feel every bit of negativity.

This is not a healthy approach, and it only leads you to suppress your emotions, which can have adverse effects on your health. We are only humans and it’s natural to experience both positive and negative emotions.

Facing your discontent or anger is the first step in overcoming it. If you pretend like it doesn’t exist, you are forcing yourself into toxic positivity, which doesn’t help you deal with the actual situation.

Example: For the last few months, you’ve been feeling like your life is a joke and you are walking the wrong path. Everything you do feels dull and pointless. But instead of asking yourself why you are experiencing this existential crisis, you keep convincing yourself that it’s all fine and your life is great.

Toxic positivity means a lack of realistic perception, and it often leaves us being overly confident of ourselves and our plans. We neglect the risks and overlook our faults. We think like whatever we do is right and we are going to succeed no matter what.

That’s why it is also called blind positivity—it clouds your judgment and doesn’t let you see the actual situation.

This also means that a person who thinks this way won’t easily accept criticism, even if it’s constructive. They will take it as a personal attack and accuse you of ruining their dreams and being too negative.

Example: You are telling your friend about your plan to open a yoga studio. She says that your neighborhood already has some yoga classes, so maybe you should think about opening it somewhere else. You get upset and accuse your friend of being overly critical and negative. 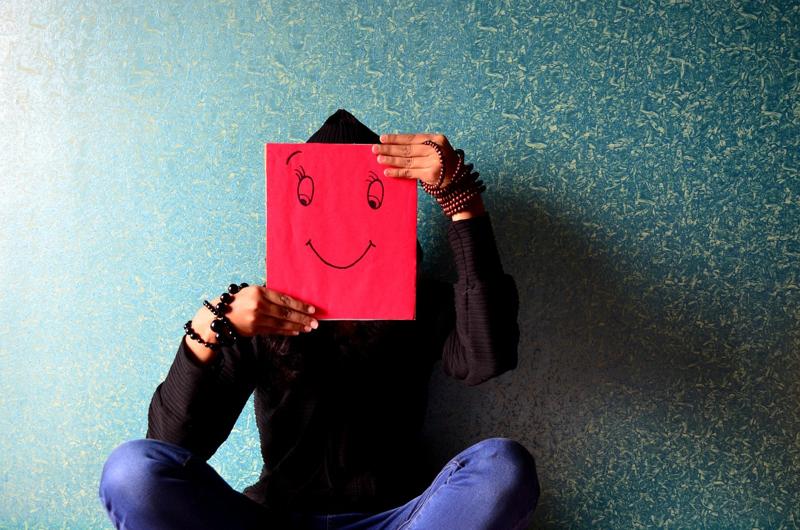 Sometimes it’s also called fake positivity. And this term makes perfect sense, since an unhealthy urge to stay positive all the time can prompt you to fake your feelings. The biggest problem is that you don’t just pretend around other people, but you also don’t face what you feel when you are alone.

You run away from your negative emotions and fake being happy. You think that your strained smiles and the words you don’t mean are an indication of being a positive person who is always nice to everybody. In reality, such behavior is a sign of toxic positivity and fakeness.

Example: You are holding grudges against your sister for an argument you recently had. Instead of talking it out, you keep acting like nothing happened and pretend to be friendly and cheerful while even being around her makes you feel bitter.

Toxic positivity can sometimes make us pretty selfish and unfeeling. We are so obsessed with staying positive and avoiding the slightest frustration that we end up dismissing other people’s feelings.

When someone you care about deals with a challenging situation, you may choose to avoid them instead of helping them out. This is because even talking about the problem they face is going to fill you with negativity. Such an approach is among the most telling examples of toxic positivity.

You are so busy with keeping a positive state of mind that you find it easier to stay away from anyone who is having a hard time. Yes, it makes sense to keep a distance from chronic complainers and bitter people, but this is different from giving a hand to a friend who happens to be in trouble.

Example: Your friend has ongoing issues in his relationship and wants to talk about it, but you avoid him because you don’t want to have a depressing conversation and deal with his disappointments and hurt feelings.

Blind positivity makes you neglect the truth and live in an illusory world where it’s all rainbows and butterflies. Real life is nothing like that.

When you choose to ignore objective factors out of the need to always stay positive, you set yourself up for failure. As we already said above, positivity is good as long as it’s realistic. When it makes you turn a blind eye to the sober reality of life, it becomes toxic.

Example: Take the toxic positivity example above where a woman talks to her friend about opening a yoga studio. Instead of taking constructive feedback into account, she is busy accusing her friend of negativity. She overlooks the risks of opening a studio in a neighborhood where there already are yoga classes.

The result? The woman in our example will probably have trouble attracting clients to her new studio. All because she ignored the reality and focused on keeping a positive mindset.

8. Being naïve and believing that positivity is the answer to all problems 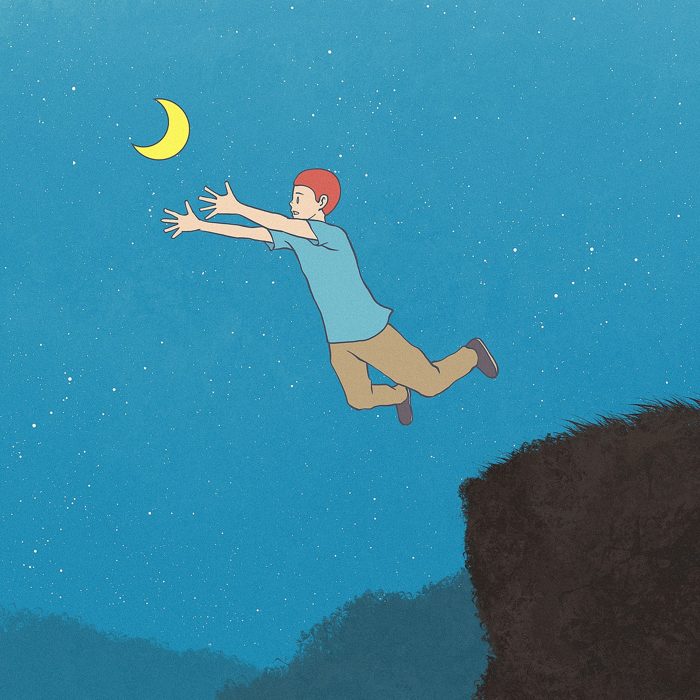 Some people who are obsessed with positivity seem to think that it’s the universal solution for all problems. They say that all you need to do is think positively, and then things will go as you wish.

In reality, if you have a dream or a goal, you need to take drastic action in the first place. Positivity is great only when it’s paired with real effort. If you dream about something but do nothing to achieve it, an optimistic outlook alone won’t work. Sitting and waiting for a miracle to happen is naïve.

I often recommend practicing positive affirmations. They can indeed prove effective for achieving different goals, from boosting your self-esteem to making new friends. But to make them work, you also need to go out and meet new people if you seek to expand your circle. Just repeating these positive statements and waiting for a new friend to knock on your door is apparently not enough!

Example: Your college buddy admits he didn’t study enough for the exam, so now he is afraid that he won’t pass it. You tell him that he should think positively, and then everything will be fine.

To sum up, positive thinking can be a powerful tool for self-improvement and dealing with adversities and disappointments. However, the key point is to keep it realistic. As you have seen in the toxic positivity examples above, practicing blind optimism is more harmful than it is productive.

Featured image by wayhomestudio on Freepik