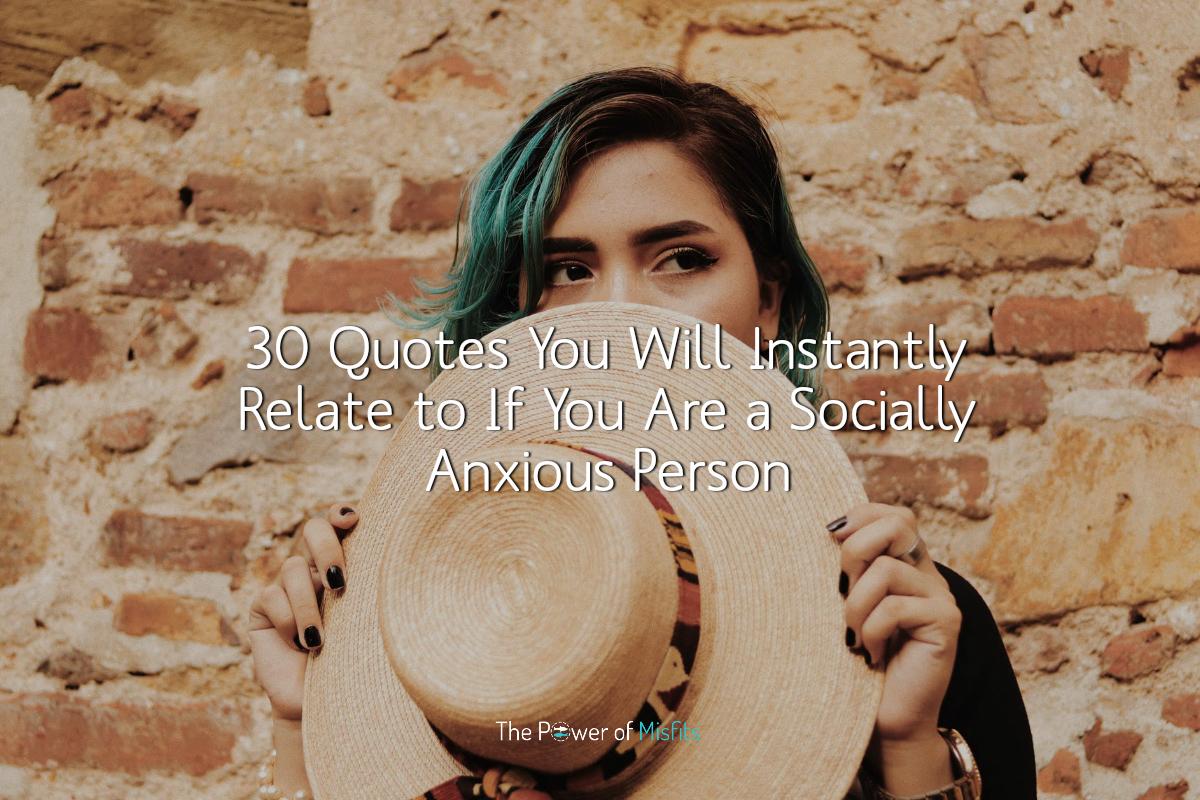 Social anxiety is more prevalent than what the numbers in the official statistics say. It’s because many socially anxious people never seek professional help.

Anxiety comes in many forms and intensities. Some people get nervous when they talk to strangers; for others, even going for groceries is a real challenge.

You will certainly find the below quotes relatable if you have social anxiety or are a socially inept introvert. They describe the experiences that feel so familiar to all the misfits, loners, and socially awkward folks out there.

1. When all by myself, I can think of all kinds of clever remarks, quick comebacks to what no one said, and flashes of witty sociability with nobody. But all of this vanishes when I face someone in the flesh: I lose my intelligence, I can no longer speak, and after half an hour I just feel tired.

2. It’s not all bad. Heightened self-consciousness, apartness, an inability to join in, physical shame and self-loathing—they are not all bad. Those devils have been my angels. Without them I would never have disappeared into language, literature, the mind, laughter and all the mad intensities that made and unmade me.

3. I certainly have not the talent which some people possess,” said Darcy, “of conversing easily with those I have never seen before. I cannot catch their tone of conversation, or appear interested in their concerns, as I often see done.

4. For someone like myself in whom the ability to trust others is so cracked and broken that I am wretchedly timid and am forever trying to read the expression on people’s faces.

5. I wondered how many people there were in the world who suffered, and continued to suffer, because they could not break out from their own web of shyness and reserve, and in their blindness and folly built up a great distorted wall in front of them that hid the truth.

6. In all her intercourse with society, however, there was nothing that made her feel as if she belonged to it… She stood apart from mortal interests, yet close beside them, like a ghost that revisits the familiar fireside, and can no longer make itself seen or felt.

Do you relate to this quote? Check out this article if you feel like you don’t belong in today’s society.

8. There is a unique sort of agony to entering a party alone.

9. Suddenly he saw himself as others in the crowd must surely see him; a silent, solitary figure, standing apart from the rest. He looked out at the hoardes of singing, laughing people and felt more alone than he’d ever felt in his life.

Do you find this quote relatable? This article about feeling like an outsider could help you make more sense of your experiences.

10. But I guess that was the whole problem, at that point, my inability to deal with normal human interaction.

11. She didn’t understand how other people did it, how they just strolled right up to strangers and started conversations — how they made themselves into people strangers would ever want to meet. She wasn’t shy, not exactly. She was afraid.

12. In familiar surroundings our manners are cheerful and easy, but only transport us to places where we know no one and no one knows us, and Lord! how uncomfortable we become!

13. He felt himself falling into a state, very common when he was younger, of being totally cut off from the society he was in.

14. I’ll be right back,” she says, and as soon as she disappears into the next room, I feel like someone has yanked my social crutch out from under my arm. I’m floundering. All I can think about is Emery coming back so I can have someone to hide behind.

15. Sometimes I see people at the supermarket or somewhere else, smiling and cheerfully making small talk with strangers and not looking tense or uncomfortable at all, and i just want to go up and ask them how they do it.

16. I think the most important thing I’ve learned, however, is that being social is supposed to be fun. I tend to forget this when I’m curled up in a ball, alone in my room, avoiding everything.

17. It was hard for me to come up with something on the fly, which is why I preferred, if at all possible, not to say anything at all for fear it wasn’t the right thing.

18. But he was quite consciously afraid of society, which he knew by instinct to be a malevolent, partly insane beast.

19. My feelings are too loud for words and too shy for the world.

20. I never wish to offend, but I am so foolishly shy, that I often seem negligent, when I am only kept back by my natural awkwardness.

21. Companionship is a foreign concept to some people. They fear it as much as the majority of people fear loneliness.

If you identify with this quote, you may want to read this article about being a loner.

22. In other people’s company I felt I was dull, gloomy, unwelcome, at once bored and boring…

23. I’ve found out that I may be more awkward than I thought I was, but then I never saw anyone because I was in my room a lot. It’s fine not to speak when you’re on your own and to stammer and to not have eye contact but, outside, it’s frowned upon.

24. Paul walked with something screwed up tight inside him. He would have suffered much physical pain rather than this unreasonable suffering at being exposed to strangers.

25. I am not created for any sort of society. The trouble is I don’t know how to behave in company. If I go anywhere among a great many people, I always have a feeling as though I were being electrified by so many eyes looking at me.

26. And I was incapable of living all by myself in those lodgings where I didn’t know a soul. It terrified me to sit by myself quietly in my room. I felt frightened, as if I might be set upon or struck by someone at any moment.

27. The surest way to become tense, awkward, and confused is to develop a mind that tries too hard – one that thinks too much.

28. I have more conversations in my head than I do in real life.

29. I wonder at my incapacity for easy banter, smooth conversation, empty words to fill awkward moments.

30. I felt this awful obligation to be charming or at least have something to say, and the pressure of having to be charming (or merely verbal) incapacitates me.

Did you recognize yourself in the quotes above if you have social anxiety?

Do you know what I find the most amazing about these quotes?

That many of them were written by people who lived over one century ago, such as Jane Austen or Fyodor Dostoevsky. It was the time when social anxiety wasn’t even recognized as a valid medical diagnosis.

And yet, these great thinkers of the past described the experiences faced by a socially anxious person with impressive accuracy.

It turns out that the feeling of being alienated from other people, not belonging to society, and being unable to connect with others is truly universal.

If you know what it means to live with social anxiety, I hope that the quotes above have helped you feel less alone in this.